Deforestation by land grabbers in territories of traditional communities and indigenous peoples in southern Piauí intensified in the second half of 2022. According to research by the Pastoral Land Commission (CPT) and the Network for Social Justice and Human Rights, in partnership with the collective of Traditional Peoples and Communities of the South of Piauí, deforestation was registered in the territories of Brejo do Miguel, Melancias and Cabeceiras do Rio (Gilbués), Chupé II and Barra da Lagoa (Santa Filomena) and Morro D'Água de Cima, in Baixa Grande do Ribeiro. Community leaders suspect that the action of land grabbers is aimed at displacing them from their territories.

Community leaders denounce the lack of agility on the part of environmental inspection bodies to remove invaders from their lands. These bodies need to act quickly so that environmental legislation is complied with and to ensure the safety of threatened communities. The communities also demand that the titling process for their territories be accelerated. The delay in this process benefits land grabbers and loggers, with catastrophic consequences for local communities. 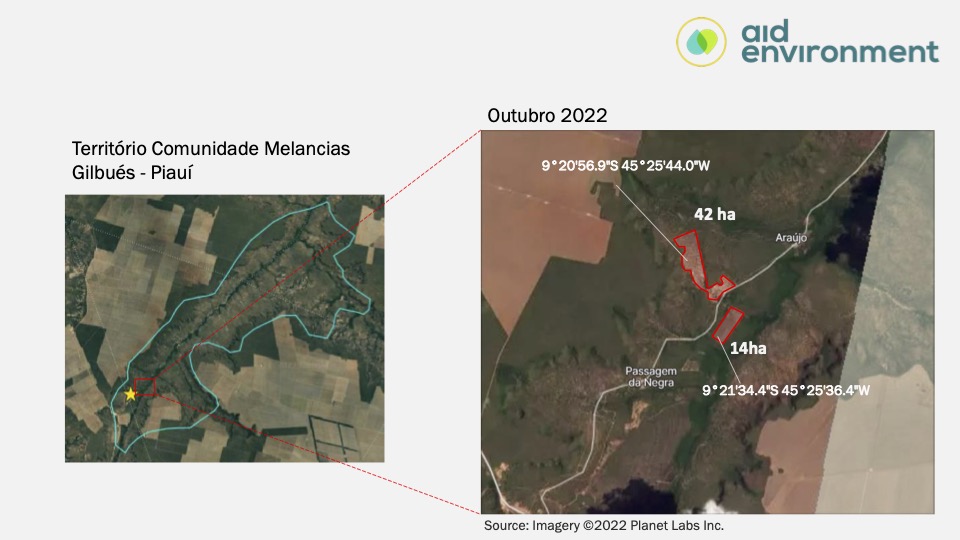 Since mid-October, deforestation has taken place in the Melancias territory, in the municipality of Gilbués, which is home to several communities already recognized as ‘traditional’ by the State of Piauí. So far, 56 hectares of deforestation have been recorded, according to satellite images. Although the communities have denounced the deforestation, the tractors are still in the place where they invaded, deforested and fenced off as part of the process of enclosing the land.

Those responsible for deforestation presented a document signed by Raimundo Bezerra Mariano Neto, judge of the Single Court of Corrente (PI), allowing the use of the area in July 2022. However, this license has been cancelled by the Secretariat of the Environment, which makes deforestation illegal. As a result, the inspection management requested an embargo on the area, which has not yet been implemented. Meanwhile, deforestation in the community area generates irreversible impacts.

The Melancias territory is in an advanced process of titling, with an anthropological report carried out in 2018 and published in the official gazette of Piauí in August 2022. Deforestation is taking place within the area already recognized by the State as an area of traditional, ‘brejeira (riverside) community’, as indicated by a map prepared by AidEnvironment .

According to Piauí legislation, the collective titling of traditional communities must be prioritized. However, there is significant delay in the titling processes, which creates space for land grabbers to advance on communities with threats and deforestation.

“The authorities need to understand that nature also needs to live. They need to hear what we, who live in rural communities and protect nature, have to say”, says Altamiran Ribeiro, representative of the CPT-PI.