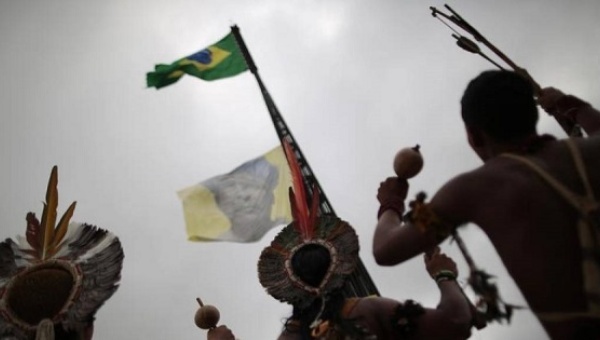 Land speculation stimulates the expansion of plantations across Brazil, increasing land conflicts and displacement of campesino and Indigenous communities.

Historically, Indigenous and peasant communities in Brazil have resisted against violence and displacement. Land concentration is a root cause of social and economic inequality, in a country where 1 percent of large landowners control over 90 percent of agricultural land. In the past 12 years, 390 Guarani Kaiowa Indigenous people were assassinated in the state of Mato Grosso do Sul, where agribusiness corporations and local large landowners have expanded monocropping of commodities.

The BAMAPITO region, which combines the states of Bahia, Maranhão, Piauí and Tocantins, has also become a target for land speculation and the expansion of agribusiness. This savanna area, rich in biodiversity, has been the home of traditional peasant communities for hundreds of years. Recently, this so called “last agricultural frontier” is at risk of destruction by a wave of land speculation, deforestation and pollution of water sources. Land market speculation consists of the same logic as the stock market, by the “secret” purchase of “cheap” land and its negotiation at higher prices.

Especially since the global economic crisis that erupted in 2008, financial corporations have created new mechanisms to invest in farmland in the global South. After the collapse of real estate markets in the United States and Europe, pension funds, banks and other financial institutions targeted   farmland as a “safe” asset or as a “material” base that could facilitate the flow of international financial capital.

By 2012, over 1,200 land deals by foreign investors were identified, covering 83.2 million hectares, or 1.7 percent of the world’s agricultural lands. This global trend represents a massive transfer of natural resources from rural communities to agribusiness and financial corporations. Pension funds from Europe and the United States have made large investments in farmland in recent years.

Brazil has been one of the main countries where land speculation has greatly increased. One of the main local players is the sugarcane agribusiness corporation Cosan through its real estate subsidiary Radar Agriculture Properties. This corporation is the largest sugarcane producer in Brazil, which preceded and laid the foundation for the current speculation on farmland.

By November 2012, Radar Corporation had acquired 392 farms in Brazil, covering 151,468 hectares, with an estimated value of around US$1 billion. Radar's main source of funding is an international pension fund linked to the Teachers Insurance and Annuity Association – College Retirement Equities Fund Corporation (TIAA-CREF). This company manages pension funds in the United States with an estimated value of US$886 billion, and owns TIAA-CREF Global Agriculture LLC (TCGA), which operates on international land markets.

In order to operate in Brazil, TIAA-CREF Global Agriculture created a local holding company, Mansilla. Together, Mansilla and Cosan are the main shareholders of Radar, as they own 89.1 percent and 18.9 percent of the company, respectively. The creation of local subsidiary companies represents a strategy to subvert Brazilian laws that limit land acquisition by foreign corporations.

In addition to attracting investors from financial markets, the Brazilian sugar-energy sector have engaged in a series of mergers with oil and commodity trading corporations. The Royal Dutch Shell oil company entered the ethanol market by establishing a joint venture with the Cosan Group in 2008. This association resulted in the creation of Raizen Corporation, which has become the largest ethanol producer in Brazil. This merger contributed to the monopoly of ethanol production, which is now largely controlled by the oil sector.

This process reveals a “detachment” between land markets and commodities markets, which means that land as an asset became the main target of financial investors, independently from agricultural production. Although the expansion of land markets stimulated extensive monocropping of agricultural commodities, such as sugar and soybeans, which increased labor exploitation and environmental destruction, the main purpose of this business is not necessarily agriculture production, but land speculation.

Land speculation stimulates the expansion of plantations across many states in Brazil, increasing land conflicts and displacement of campesinos and Indigenous communities. The territorial expansion of agribusiness occurs mainly in regions that are rich in water sources, biodiversity and infrastructure. As a result, the potential social and environmental impacts are alarming and can have severe consequences for Brazil’s capacity to guarantee food production for its internal market.

*Maria Luisa Mendonça is a professor at the International Relations Department of University of Rio de Janeiro and Director of Brazil’s Network for Social Justice and Human Rights.